Endometriosis is a condition in which the lining of the womb (uterus) is found in areas outside the uterus.These lesions vary in size from microscopic to large invasive masses that erode into underlying organs and cause extensive adhesion formation.
It usually occurs in women in their thirties to forties but we are beginning to see it in patients much younger including teens and early twenties.
It is more likely to occur in women who have not had any children, or who have had their families late, or who have a history of painful periods. Women with Endometriosis may be completely asymptomatic or crippled by pelvic pain and infertility. Endometriosis may affect up to 20% of women at some time in their lives.
Endometriosis is most commonly found in the abdominal cavity, on the lining of the abdomen especially the area behind the uterus. (Pouch of Douglas and Uterosacral ligaments). Another common area is the area just behind the ovaries and on the surface of the ovaries (ovarian fossa). Endometriosis may be found in more distant areas including the brain.
Endometriosis is a condition which often runs in families and frequently has a tendency to grow back later, even in someone who has been effectively treated. It almost always disappears at menopause.

What are the Symptoms of Endometriosis?

The most common presentation of endometriosis is pain. The pain is usually in the lower abdomen, but may occur in the lower back. It usually with periods, but may occur during ovulation, when passing urine, when opening the bowels, during intercourse or during internal examinations.
Abnormal periods, difficulty in conceiving and bleeding from the back passage may also occur with endometriosis.
One of the commonest symptoms I have found is that most patients with endometriosis do not get their periods full on. It initially starts with a small amount of premenstrual spotting before developing into a full blown period.

How is Endometriosis Diagnosed?

Endometriosis may occur for some time before a diagnosis is made. The diagnosis can usually only be made at operation (see laparoscopy or laparotomy) by seeing the areas of endometriosis inside the abdomen where they appear as white, red or black spots at surgery. With vaginal ultrasound scans endometriotic cysts of the ovaries may be diagnosed prior to surgery.

What Treatments are Available?

My usual regimen of treatment is to surgically remove as much of the endometriosis as possible at the time of diagnosis. Although this removes all visible areas of endometriosis there is usually endometriosis present which is not visible to the naked eye. It is therefore my usual practice to place patients on some form of hormonal treatment for up to 6 months thereafter, depending on the findings at laparoscopy.

The aim of using hormones is to suppress the menstrual cycle and to inhibit the activity any stimulation of the patches of endometriosis.

There are three main types of hormones.

1. Progestogens
These act directly on the endometriosis, for example Provera, Depo-Provera, Primolut N,
Duphaston and Dimetriose.

2. The GnRH Analogues (Gonadotrophin releasing hormone analogues)
This group of hormones suppresses the cycle at the level of the controlling centre in the brain. They include, Zoladex and Synarel.

3. Danazol
This switches off the control centre and directly suppresses the endometriosis tissue.
These hormones usually stop the periods and greatly reduce symptoms.
The hormones are usually taken for six months, but the progestogens may be taken for much longer. Side-effects range from mild to quite severe.

Surgery may be conservative or major. Conservative surgery is usually performed in women who have not yet completely their families to reduce symptoms and to improve fertility. It involves removing as much of the endometriosis, scar tissue and adhesions as is possible.
More extensive surgery involves removing the uterus both ovaries and tubes (a total hysterectomy and bilateral salpingo-oophorectomy). This results in the cessation of ovulation, menstruation, the inability to conceive and the onset of menopause. Hormone replacement therapy with oestrogen and progesterone may be advised. (see HRT)

PERMISSSION TO REPRODUCE THIS LEAFLET IS GIVEN AS LONG AS ACKNOWLEDGEMENT IS GIVEN TO NAYLIN APPANNA. 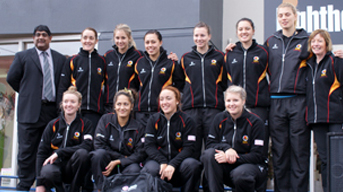